This is a bit delayed, but I remember the day well. Day three. I woke up in a great mood, I just knew it would be a great day. I was up early, around 7 or 8 and was bored. All the boys were sleeping so I decided to go to the market by myself. First, I got some meat on a stick for all of us. It sounds gross but it was amazing. It was also only 20 baht total, less than a dollar. I also picked up the boys some boiled rice soup. I was trying to see if the market people charged me (a female) less than the boys and I think they did, just a few baht less here and there. Very interesting. I got some Thai pastries also, which is basically sweet bread filled with a custard of sorts. On my way out I bought myself a spring roll and pork rice bun for breakfast, only in Thailand can I have spring rolls for breakfast. I love it.

Anyway we decided to stay at the local beach for the day, Mae Nam. It is the most beautiful beach I have ever seen. 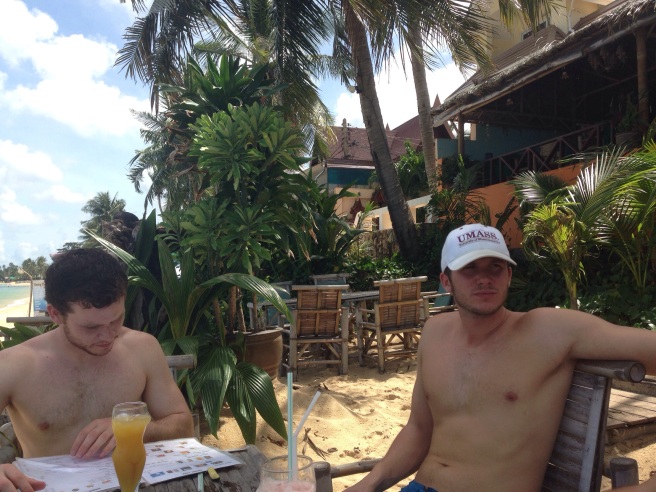 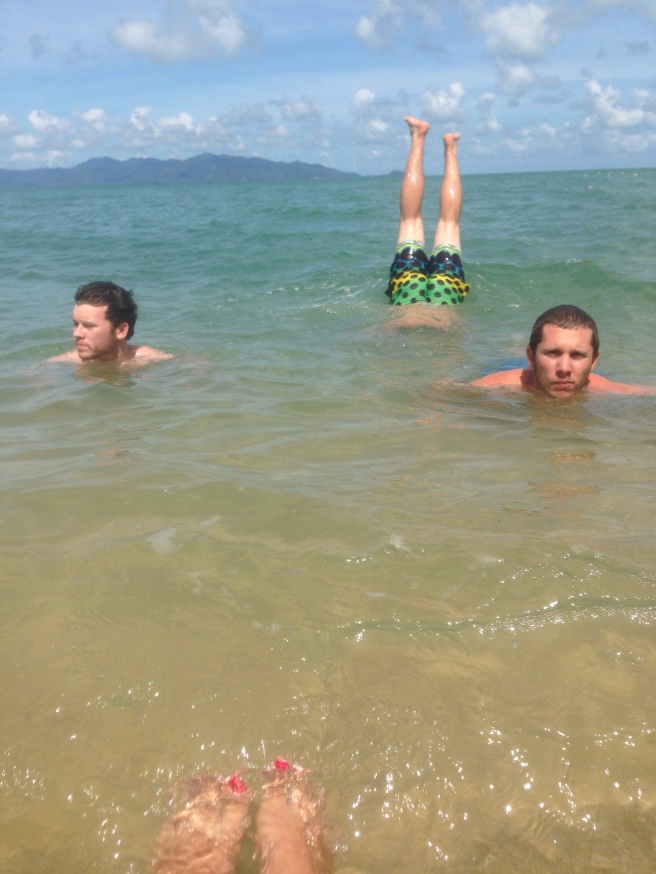 We stopped at Sea One, a little beach side restaurant recommended to us by the owner of our villa, to get some lunch. I chose the Pad Thai, which never seems to be a bad choice here in Thailand (go figure). Glove got fish and chips, Spense got some fried chicken, and Chand got an omelet with chicken and shrimp. Our meals had no fluidity. Regardless, they were enjoyable. 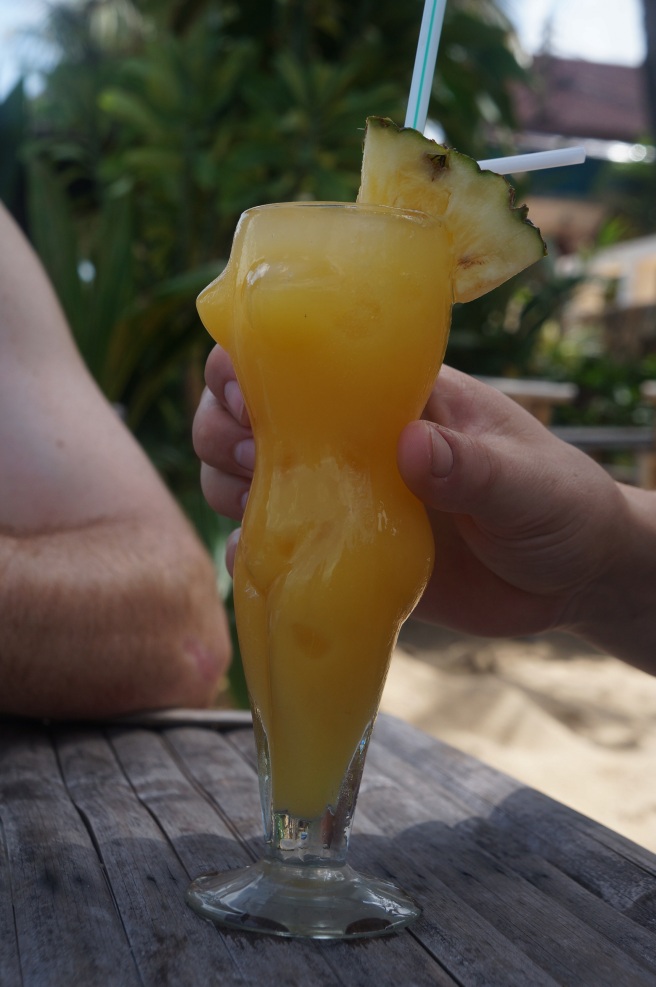 We spent the rest of the day on the beach then returned home in order to have enough time before dinner. It was Ron’s sons’ 5th birthday, so I was really excited. I went to this really big indoor store/market of sorts and found him a 25baht motorbike toy. I’ve never shopped for a 5 year old boy before so I was sort of lost throughout the whole process. Afterwards, I wandered down the street to get myself some Thai coffee. Coffee here is much different. It’s pretty much just some liquid sugar and sweet condensed milk with a splash or two of coffee. It’s also served in a bag… In a bag… In a bag.

I only had five sips of this before my stomach started to hurt. I drank as much as I could but then just gave up.

We’ve been drinking a lot of Chang beer on this trip, they sell it by the big bottle, just a bit smaller than a 40 back home. Chand and Spense went to the grocery story to pick up a box of 12 and a box so Singha for Ron, which is the kind he likes. We decided to also give Ron’s son a $5 bill to be cute. You know, because it was his fifth birthday. Of course there was no wrapping paper handy, or tape, so I found some newspaper and sorta just rolled the gift up in it.

We went to Ron’s (which is right next door) at 6 and have Ronan (?) his gift. He LOVED the motorbike, but threw the $5 bill away haha. Ron actually threw it aside too, we had to explain that it was actually
American money. Compared to the baht, which is colorful and sparkly, American dollars are pretty ugly, I would have done the same.

Ron’s wife, Kuk (pronounced Kook) made an amazing Philippino meal, because Ron is from the Philippines. (Side note, they said nothing about the typoon, kinda surprising). Kuk had made rice, fried chicken, noodles with vegetables, and a pork stew with potatoes and carrots. It was the best meal we have had so far. I obviously forgot to take a picture though. My bad.

Here in Asia, everyone drinks beer with ice in it. After having it a few times, I’ve really grown to like the combination. It masks the wet dog taste that only the last few sips have. Anyway, we got LOTS of
beer. It was a good thing because much of Ron’s friends and family came over to celebrate. His best friend Peter is from Germany, but almost everyone else was Philippino. His father, brother, uncle and nephew were all there. Ron is a guitar player. He actually came to Thailand from the Philippines to play music with his aunt. He got his start traveling around and playing in hotels, which makes really good money I’m told. That’s also how he met his wife Kuk. The tourism industry (mainly real estate) in Koh Samui is one of the best to be involved in, because there are tons of international people here.

Soon, the drinks were flowing, the music was playing and everyone was getting along amongst themselves. 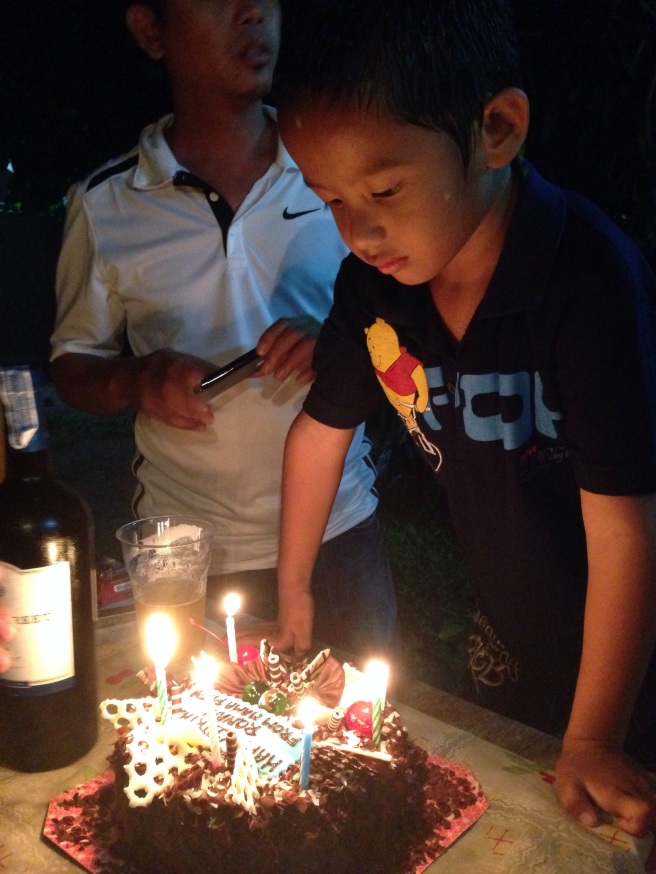 I ended up talking to Kuk for what seemed like hours, and fell in love. We got along so, so well. I told her the whole story of Spense and me (which isn’t short), explained why weed should be legal in the states, and we agreed on how awesome second hand clothes are.

Kuk has an amazing singing voice. I was completely blown away when she started to sing. Her range is huge. I have a video I will try to upload. They actually got ME to sing. Which is crazy because I have such stage fright. The boys took a video but I’m too afraid to watch.

We ended up running out of beer so Chand hopped on the back of Ron’s bike and they went to get more. Nothing like seeing two men sharing a little motor bike. Time flew by and the kids all got really restless and cranky. Ron’s nephew, his wife and their two children hopped on his bike and went home. It’s still crazy for me to see how whole families travel on these bikes together, even newborns.

We all decided to call it a night in hopes that we could salvage the next day and avoid hangovers. It sort of worked.

One thought on “Koh Samui: Day 3/ Best day ever”