After Siem Reap, we moved on to Phnom Penh, which is Cambodia’s capital city. Stationed right on the river, most of the traveler hang outs can be found on the water’s edge. Though Phnom Penh has plenty of cultural significance in it’s location, much of it is dark from the days of the Khmer Rouge rule.

The city itself is busy, filled with tuk Tuks and motorbikes. Within the city limits are the National Museum, housing exhibits of both Buddhist and Hindi architecture. There were old weapons, tools, statues, and plenty of other miscellaneous artifacts that you would expect to find in a museum and it was good to learn a bit about the architectural styles. 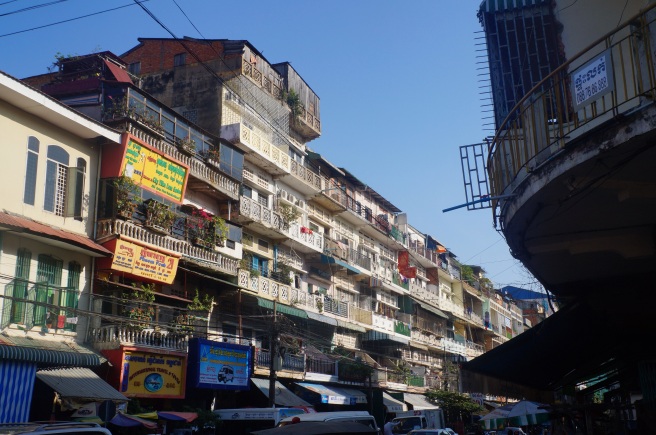 We were also able to find some cheap accommodation and food! We spent the night of my birthday at the FCC Restaurant on the riverfront, enjoying some delicious shrimp cocktails (prawns with chipotle aeole sauce), juicy strip steak, and chicken Caesar salad. We kept it within the local tradition and finished off with a big bottle of champagne.

Though the city wasn’t very appealing to us in comparison to many of the other places we’ve visited, a lot of it’s history is still prevalent in the countryside attractions.

During the Pol Pot regime, many of the country’s working class citizens rose up under Khmer rule and exterminated a large population of the white collar workers. We were able to visit the S21 prison, a terrifying detainment camp in the city center that jailed people before there ultimate journey to the killing fields, outside the city limits.

The Killing Fields have been turned into an amazing self-guided audio tour. Though the stories you hear are heart-wrenching, they are a very effective way to learn about the atrocities committed in the second half of the 20th century.

Phnom Penh is a developing city rich in sad history, and though it wasn’t one of our favorite stops along the route, it’s an eye opening experience for anybody traveling through the area.

One thought on “Phenomenal Penhs”